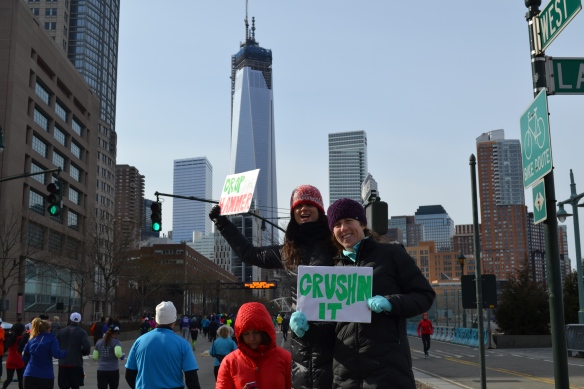 My friends at Hot Bird Running asked me to be the featured runner in their weekly “Interview with a runner” series.   Apparently every other runner in the world was too busy, so I agreed to do the interview.  If you found me through the Hot Birds, then check out my facebook page while you’re here.

Please note – this is not a humble brag.  It’s a 100% blatant brag tinged with self-deprecating humor.

If you enjoy the things that I do here (like hysterical commentary, hilarious stick figure drawings, and hackneyed charts and graphs), then you will like this interview.

Please note that I linked to the interview about 50 times.  But if you’re a moron and missed those embedded links, here’s a more obvious version, idiot:

Even though I won’t be running the NYC Half Marathon this year, I’m a three-time finisher, so It’s my obligation to share my race secrets with the special few that NYRR has allowed into this year’s race.  They include a) A collection of the worlds best professional runners, b) Thousands of international runners, and c) Ten New Yorkers who were selected through a Hunger Games style lottery.

Good luck to you.  Here are some last minute pointers:

Sure, trained professionals like my run coach friends, Meghan and Jessica at Hot Bird Running, may scold you when you eat 20,000 calories of spaghetti and meatballs mere hours before a race.  But who are you going to listen to?  A couple of certified run coaches who dedicated their lives to making you healthier and happier or the guy who draws funny stick figure pictures? 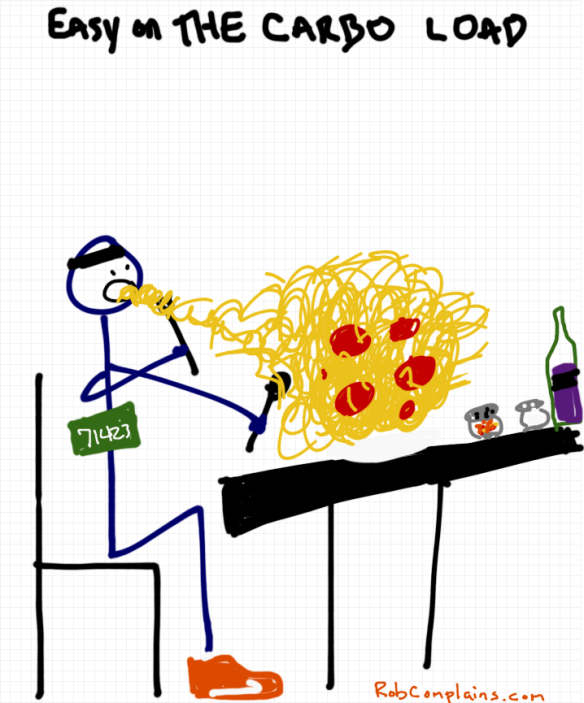 It’s chaos.  Seriously.  If you are planning to meet people at your starting corral, you may want to rethink that plan.  Every year, the set up has been different.  With last year being the worst because each stable area had its own set of bathrooms.  In theory this sounds amazing, but in practice, it meant that people waited in line for an hour while people already in the corral could cut the line.

This is also where I do my pre-race nerve-vomiting.

The course.  If you run Central Park often, you know what you’re in for.  If you’re an out of towner running the race for the first time, here’s a quick breakdown of the course. 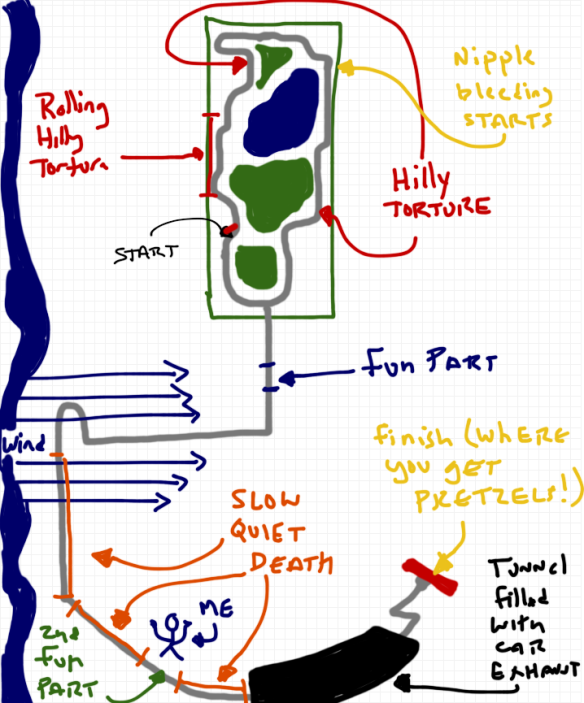 Miles 1-6 are in Central Park.  They changed the course slightly from when I ran it.  From the looks of the new map, the start will be slightly down hill until about the Mile 1 marker.  Then you will embark on “cat hill,” the first of many grueling tortures you will endure.  This hill is particularly awful because it’s a huge hill, then you get to the top, the road briefly flattens and then starts climbing again.  You will vomit.  It’s also about where your nipples will start to bleed.  Welcome to NYC!

Mile 2 will be awesome.  Look to your left for a sort of view of the Central Park reservoir.  If you ever get the chance to run around the reservoir, take it.  It’s a fantastic opportunity to berate parents pushing strollers and people on bikes, neither of which are allowed on the path.  Actually, I’m not sure if strollers are allowed or not.  If they are, apologies to that nice family that I called the C word for pushing a double wide stroller when I was sweating past them.  Yeah, that’s right.  I called them communists.

Mile 3 will be the worst part of the race, at least since Mile 2 and until you get to mile 4-13.  Mile 3 will be a combination of a big sweeping downhill around the northeast corner of the park.  That will flatten out and you will climb straight up a mountain in the back northwest corner.  You may notice that many people start to walk at this point.  Don’t be one of those people.  Listen to the volunteer standing there telling you to “stay inside the cones” and encouraging you that you’re almost to the top of the hill.

Pro Tip:  All of the lampposts in the park are labeled with the street number.  If you look at the bottom of the post, there will be a number that starts with two digits, like 90-01.  That means you’re at 90th street.  I have no idea what the 01 means.  Let’s just agree it means you’re number 1 to me.  Every twenty blocks is approximately 1 mile.  If you really start to struggle, count left foot strikes between posts.  Usually there are 10-20 strikes between posts.  I struggle a lot.

Mile 4 is the rolling hills of the west side of the park.  It’s terrible.  Every time you get a little break with a down hill, you head right back up a little uphill.  Look for my sister around mile 4.  She is nice.

During mile 5 and 6, you’ll be thinking, “get me the hell out of the park.”  Try not to start running faster.  You may get out of the park faster, but then you’re going to hate yourself by mile 9.

Mile 6-7:  The best part of the race!  You finally will hit the mean streets of Manhattan.  The road opens up and you can spread out and get away from that sweaty beast (me) who has been breathing down your neck for the last hour.  Lots of people will line the streets.  You’ll see huge buildings.  Your GPS watch will freak out and lose its signal and suddenly you’ll think that you’re running a 4:11 pace.  Enjoy the ride here because things are about to get pretty bad.

Mile 7-9.  At mile 7, you’ll turn right onto 42nd street.  The Big Apple, baby!  Riding high from seventh avenue, you are literally on top of the world at this moment.  You may think to yourself, “I can do anything!  This is so easy!  I’m a machine.”  Enjoy that feeling because as you turn right onto 42nd, you’re about to get blasted with a gale force wind coming off the Hudson River.

And as you amble over towards the West Side Highway, notice that they haven’t cut off traffic coming in the opposite direction.  So you’ll be inches away from angry New Yorkers smogging their cars in your face.  They will stare at you and berate you for making their drive take twice as long.  I know because before I ever ran the race, I once missed a tee time in NJ because I got redirected by those stupid runners.

Once you’re all the way west, they make you head back uptown for one block, which feels like you have to backtrack.  Also, the people disappear for this stretch of the race and it starts to become hard.  The Highway is exactly as it sounds:  Flat, boring, and trafficy.  Prepare for long stretches that are exactly the same.  Bring your ipod so you can suffer through this stretch with the musical stylings of Justin Bieber.  That’s how I managed.

After Mile 12, the race goes underground into the Battery Park Underpass.  It’s dark and it echoes.  Someone will yell something stupid when you’re under there.  Don’t be that guy.

When you come out of the tunnel, you’re basically done.  Except you’re at the furthest point from everything else in New York.  So figure out a way to get home.  Last year, I ended up having to walk about 2.5 miles back to my apartment because I was a bad planner.  Don’t be a bad planner.

I guess, congratulations.  You’re a half marathoner.

Celebrate by eating enough calories of ice cream and bagels to negate any positive benefits of months of training.