Although it would have been hilarious for me, a lot of people would have been angry if last week’s big announcement was an elaborate April Fool’s prank.  Thankfully it wasn’t.  Neither is the sympathy weight I’ve been packing on.  That’s why yesterday, when I re-entered the world after a nice baby-free vacation, Anne and I launched our latest project.  Operation 80 to Baby.

Operation 80 to Baby is an elaborate workout program that I developed to make sure that my future kid does not have a morbidly obese dad.  Here’s how it works.

Step one:  Make a chart.

Anne’s participating as well, but she’s stuck on step one.  Her chart has to be all pretty.  Mine is purely functional.  I used construction paper and a blue pen.

Step 2:  Write 80 numbers on the chart, one for each day that you plan to work out.  I chose 80 because the baby is due in about 20 weeks.  If I can work out an average of 4 days per week every week until the baby’s supposed to arrive, then I will have successfully created a habit that won’t go away post baby.  When I was moping around saying to Anne, “Blah blah I’m so lazy Blah Blah,” she reminded me that it will probably be easier to start now and continue than it will be to restart from nothing in a few months.  Point taken.

Step 3:  Every time you work out, cross one of the numbers off.  I like to do this in order, but you really don’t have to.  Anne’s still trying to figure out what she should put on her chart.  This morning she thought that taping 80 little pictures of babies would be “fun.”  I told her it was creepy.  But she didn’t hear me.  So she won’t get mad that I said that until right now when she reads this.

For my first work out, I did a little yoga at home.  Recently, YogaJack, a company that has developed a line of yoga products specifically targeted to manly men like myself, was kind enough to send me one of their mats to review.

As a man (and a particularly sweaty and chubby one), I can say that I’ve put this thing through the ringer.  My initial impression was that I wanted it to be a little stickier.  The more I use it, however, the better it gets.  Apparently yoga mats have a weird sheen on them at the beginning that wears off over time.  This one was no exception.

I do know one thing that made it manly.  The mat clearly has a top and bottom.  When I used it, I correctly placed the mat so that the “top” was facing up and the “bottom” was touching the dirty floor.  Anne tried the mat, and she had it upside down.  Women, right???

Final note, before I started using the YogaJack mat, I had a lululemon mat.  In all fairness, this mat was “stickier” than the YogaJack mat, but it smelled like a plastic fart, which is not a smell that is nice when your face is literally pressed against the mat.  I’ll take care of making a mat smell like death in my own time, I don’t need it to start out that way.  But not only does the lululemon mat smell like fart, it also sounds like fart if it gets wet and your skin touches it at all.  So basically, if you use the lululemon mat, everyone will just think you’re ripping away, and they’ll believe it too because it will smell like that.

Step 4:  Share your plan with the internet.  Let them hold you accountable when you slack off.  When you see me, if it looks like I’ve gained 80 lbs of sympathy weight, remember that’s not how the plan works.  Feel free to poke my belly.  If I laugh like a doughboy, the plan’s not working.

And that’s it.  If you’re interested in a personalized plan for yourself, please email me.  How much would you guess such a plan would cost?  10,000 dollars?  One million dollars?  No dollars?  Oh no, you can have a plan of your own for just $199.99.  That’s right.  For just $199.99, a mildly successful blogger will create a plan exclusively for you.  You can pick the color of the construction paper and the color of the pen to match all of your fitness needs.  But wait, there’s more.

I couldn’t think of anything to offer for the more part, so forget I said it, okay?

With just a little bit of work, this could be you in 80 days: 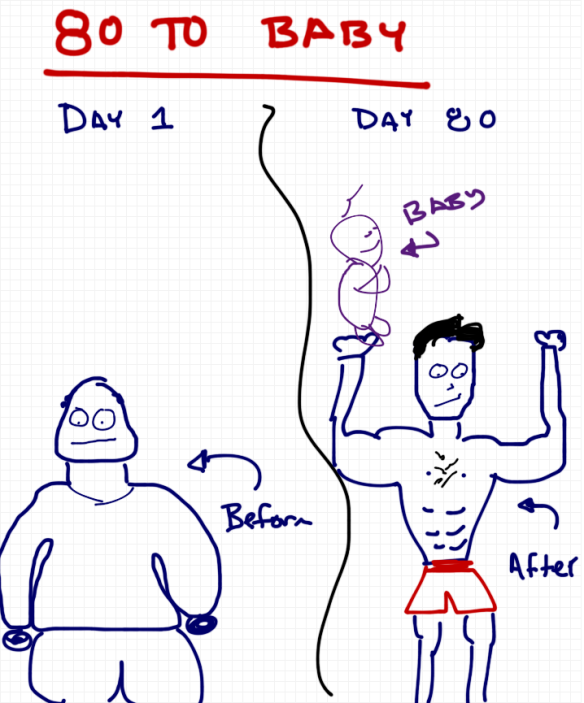